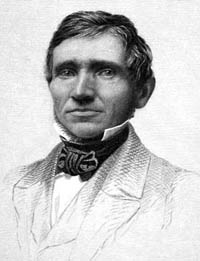 Charles Goodyear despite having no money, no knowledge of chemistry and only the crudest of tools, spent years experimenting with rubber. Prior to starting his experiments with rubber, Goodyear had a hardware business which went bankrupt. That was the beginning of many disastrous business attempts undergone by Goodyear. His first foray into inventing rubber products was not actually for rubber. Instead he invented a valve for inflating rubber life preservers. In 1834, he tried to sell his design to the Roxbury India Rubber Company in New York City. But on his visit there, he discovered that Roxbury India Rubber Company was on the verge of failing. Customers were returning life preservers because they were melting in the heat. The business was so bad and the failure such an embarrassment that a pit had been dug to bury failed products. The valve needed improving but the rubber was worse.

On his return to Philadelphia, Goodyear was arrested and placed in Debtor’s prison. It was in the Debtor’s prison’s kitchen that he began his experiments with India rubber. What Goodyear thought was his first success involved heating the gum and adding magnesia. A white compound which appeared to be no longer sticky was produced. Goodyear actually found some investors and beginning producing his first rubber product. In his own home, with help from his wife and children, he started producing shoes with India rubber, lampblack and magnesia. Not long after he began, it was discovered that even the rubber treated this way became sticky. The failure left him with no investors.

Goodyear did not give up on his rubber experiments. He sold his furniture and moved his family into a boarding home, while he went to work in a New York attic with a druggist. Eventually, a new business venture had potential when the United States Post Office ordered 150 mailbags made of sulphur-treated rubber. The sulfur-treated rubber fabric was still useless at high temperatures and melted in the summer.

The continued failure of Goodyear’s experiments did not stop him from persevering. He continued to live in extreme poverty, even selling his children’s schoolbooks for money while working on the perfect way for treating rubber. In 1839 while living in Woburn, Massachusetts, he finally discovered a process for curing rubber. The actual events behind the invention are questionable but there is one popular story about the invention. 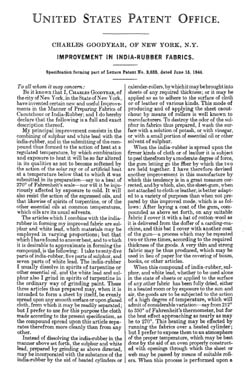 One day in February, Goodyear went into the Woburn general store to show off his latest gum and sulphur formula. The men sitting around the store began laughing at him. Goodyear got angry at the laughter and began wave his sticky gum in the air. The material flew from his hand and landed on the stove. When scraping off the substance, he discovered that instead of melting, it had charred like leather. The gum had basically formed a new substance. Goodyear after all of his years of experimenting had finally produced weatherproof rubber.

Goodyear’s invention did not immediately lead to good fortune. He spent the next five years experimenting with how much heat was needed for how long to achieve the correct results by roasting bits of rubber in hot sand, toasting them, steaming them and pressing them between hot irons. Finally he perfected the process of vulcanization and applied for a patent. On June 15, 1844, Goodyear received U.S. patent 3633 for an improvement in India Rubber Fabric.

Goodyear did not go on to work in the manufacturing of his new product. Instead he made yet another poor business decision. He granted licenses for companies to manufacturer the rubber at incredibly low prices. He then went to work on looking for new uses for his product. His patent was constantly being infringed upon. With lawyer Daniel Webster, he sued many people over his patent. Eventually, Goodyear paid Webster more money then he ever made from his invention.

In 1860, when Goodyear died after years of exposure to harsh and toxic chemicals, he was $200,000 in debt. He never saw any profit from his invention. His family however eventually received enough royalties to be comfortable. Goodyear though was never bitter about his losses.

He once wrote “Life should not be estimated exclusively by the standard of dollars and cents. I am not disposed to complain that I have planted and others have gathered the fruits. A man has cause for regret only when he sows and no one reaps.”