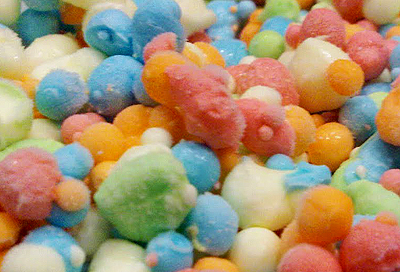 Have you ever wondered how those tiny beads of ice cream that you can buy at the mall and amusement parks are made? Dippin’ Dots are cryogenically frozen ice cream balls made with the same ingredients as regular ice cream. The ice cream treat was invented by microbiologist Curt Jones in 1987.

In 1987, Jones was working on research for new techniques for freezing bacteria on a large scale. He developed a process for making cattle feed by freezing it in chucks at 350-degrees below zero to preserve the nutritional content. One day, while making ice cream with his neighbor, he had an idea to use a flash-freezing technique to freeze the ice cream. The frozen treat would retain the flavor of ice cream but have none of the iciness.

Six months of research and experimentation resulted in Dippin’ Dots. Flash-freezing the ice cream in liquid nitrogen produced hard balls about the size of a pea. The treat which is stored at 40 degrees below zero and served at 20 below keeps it shape for about 10 minutes at room temperature. The beads slowly melt when eaten. 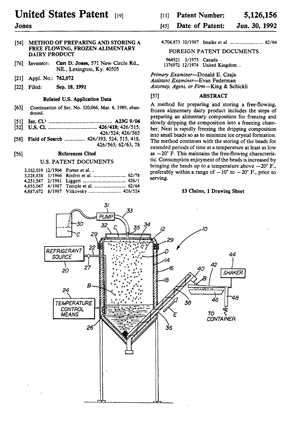 The process of homogenizing and processing an ice cream drop takes about two hours. But then the ice cream dot is frozen in less than 2 second.

Curt Jones applied for a patent for this invention on September 18, 1991. He received US Patent 5,126,156 for a method of preparing and storing a free flowing, frozen alimentary dairy product on June 30, 1992. Dippin’ Dots used this patent to sue another company, Mini Melts, for infringement in 1996. Ultimately, Mini Melts was victorious and the Dippin’ Dots patent was ruled unenforceable. The courts ruled the patent invalid because it was “obvious” and the company did not disclose prior sales when applying for the patent.

The product was not an instant success. Jones opened a store to sell his product in Lexington, Kentucky in 1989. By the end of the year, the store was closed due to poor sales. The company began instead to distribute and sell their products at fairs and amusement parks. Still, this method of sales was also not instantly successful. Jones was asked to remove a stand from Opryland because the product was not selling well. Their luck changed when Jones realized the way to get people interested was to give out free samples.

Today, you will see the frozen treat being sold in amusements parks, fairs, malls and in vending machines across the country. But you will never see the product in a grocery store. Many home freezers do not reach a cold enough temperature to store the treat and so instead of having nice frozen ice cream beads, the ice cream often lumps together.