Is it true Yankee Stadium was built with special cement Edison himself had invented?

Hi Valerie,
Thank you for the question. I knew Edison had invented many things but I never considered cement products might be among them.  Here is what I learned: 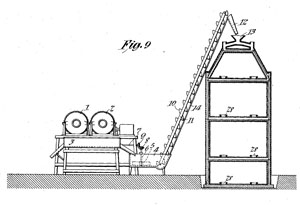 Edison did not invent a special cement but he did form a company to produce cement. The Edison Portland Cement Co. provided 68,000 bags on concrete for Yankee Stadium.

Starting in 1898, Edison worked to develop new cement processing technology. Among these was a giant rotary kiln which was used by his company. The cement company was formed not to sell cement but to manufacture the material Edison wanted to use to produce everything from houses and furnishings to pianos.

In 1907, Edison introduced a mold to cast a single piece concrete house. Everything from the shingles to the bathtub would be cast from the single piece of concrete. These houses were one of Edison’s failure. They weighed about a half million pounds and were not as cheap to make as he initially thought. In order to build the houses, a developer first had to invest $175,000 to purchase the huge concrete mold. Edison hoped to solve the immigrant and poor housing problem with his new design. But the idea never took off. Still a few of the houses that were built are still standing today. 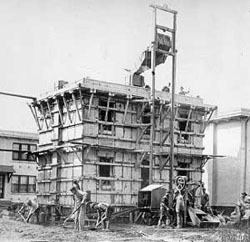 Edison even applied for a patent for his concrete homes on August 13, 1908. He received U.S. Patent 1,219,272 for the Process of Constructing Concrete Buildings.

Ask the Geek, Get a Free Patent Mug

That’s right, if your question is chosen to be featured in our weekly “Invention Geek” column, we’ll send you a free one-of-a-kind patent mug custom pressed with a picture from your invention and the title of Honorary Invention Geek.

Got a pressing question about innovation history? Jump over to Ask the Invention Geek for details & an easy entry form!

One thought on “Invention Geek – Yankee Stadium and Thomas Edison?”