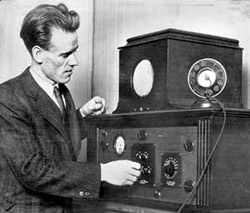 Farnsworth’s aptitude with electricity was evident at an early age. His parents had expected him to be a concert violinist. Instead his interests led him to experiments with electricity. He built an electric motor and produced the first electric washing machine his family had ever owned  at the age of 12.

His experiments with television began at the age of 14. Then he worked out the principle of the image dissector television camera. He produced the first working version at age 21. A farm boy, his inspiration for the scanning lines of the cathode ray tube (CRT) came from the back-and-forth motion used to plow a field. 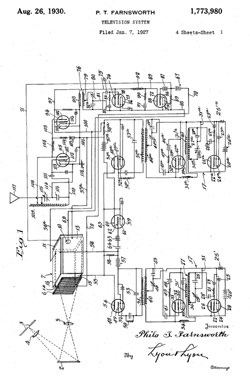 This patent later led to a ten-year battle with RCA.  During his litigation with RCA, Farnsworth’s high school chemistry teacher, Justin Tolman, reproduced a drawing that Farnsworth, when he was just 14, had made on the blackboard at the school. Farnsworth eventually won all of his legal battles with RCA. RCA had to pay Farnsworth $1M for patent licenses, for TV scanning, focusing, synchronizing, contrast and controls devices. He also became the first Independent Inventor EVER awarded a royalty-paying patent license from RCA.

The Franklin Institute in Philadelphia and Farnsworth became the first to demonstrate television to the public in August 1934.  Though the exhibit recent little advanced publicity, people lined up for blocks to see this new invention. It was such a success that the ten-day event ended up going day and night for twenty-one days.