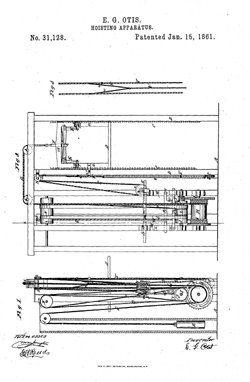 The first passenger elevator was designed for France’s King Louis XV for his personal chambers in Versailles in 1743. Called the “Flying Chair” the elevator only went one floor, connecting the king’s chambers to his mistresses’ on the second floor of the palace. The king entered his elevator through his balcony and a arrangement of weights and pulleys hanging inside a chimney were pulled to raise or lower the chair.

Elevators became more and more common in the early 19th century. By 1850, steam and hydraulic hoists were being used in factories and mines. It was in 1852, that elevators were changed forever. Elisha Otis invented the safety elevator. Otis was working to convert an abandoned sawmill into a bedstead factory. His employer needed a way to get the equipment and people to the upper floors of the building quickly and safety. Otis had, of course, heard of hoists that were being used but he was also aware of the safety concerns of such devices.

Otis was a tinker and inventor and wanted to make a device that would be safer to use, one that would not fall. He finally came up with an answer. He invented a brake for the elevator using a tough, steel wagon spring meshing with a ratchet. He put the wagon spring on top of the hoist bar and ratchet bars attached to the guide rails on both sides of the hoistway. If the cable on the hoist snapped, the tension from the wagon spring would be released and engage the ratchet bars which would securely lock the hoist platform in place and prevent it from falling. For this invention, Otis received United States Patent 31,128 on January 15, 1861 for an improvement in hoisting apparatus. 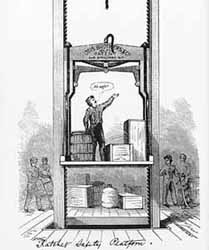 Otis had a few sales and there was interest in his elevator so he began his own elevator company. Sales were not as plentiful as he had hoped. In 1854, looking for a way to publicize his invention, Otis demonstrated his new safety elevator at the Crystal Palace Exhibition in New York. Otis ascended forty feet above the crowd in his new elevator then ordered the rope holding the platform to be cut. As the rope broke, the elevator only fell for a few inches before the braking mechanism engaged and the platform stopped its descent. The crowd was astonished and word of the new safety elevator spread quickly.

Between 1854 and 1855, Otis sold 22 of his new devices to factories and other business. The cost of the safety elevator was $350 for a model which could lift 500 pounds and $750 for an elevator able to lift as much as 8,000 pounds. The first regularly used commercial elevator was installed in New York City at the E.V. Haughwout and Company department store on March 23, 1857. The elevator ascended at a rate of 40 feet per minute. Sales of the elevator continued only to grow. In the 1870’s, over 2,000 of Otis’s safety elevators were installed. Today over 2.3 million elevators manufacturer by the Otis company are in operation.