Not all new discoveries are made by adults. It is surprising the inventions that have been developed by kids. A new way to keep your ears warm, delicious summer treats, an entertaining jumping contraption and a writing system for the blind were all invented by children. 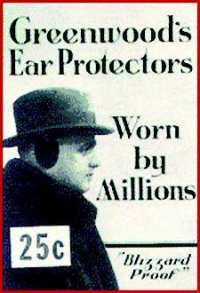 Chester Greenwood was an avid ice skater who lived in bitterly cold Maine. He attempted to keep his ears warm while skating using a scarf. But the bulky and itchy scarf he wrapped around his ears was unsuccessful. He needed to find a better way to stay warm while skating. At the age of 15, he made two circular hoops from wire and asked his grandmother to sew beaver fur and velvet on them. He held his two fur covered loops together with a steel band that created a headband. His new contraption was more much successful in keeping his ears warm.

This simple, easy to make invention became an instant hit. Everyone wanted a pair of Greenwood’s Ear Protectors. On March 13, 1877, at the age of 18, Greenwood received U.S. Patent #188,292 for An Improvement in Ear Mufflers. He established a factory in West Farmington which he called the Shop. In 1883, his twenty employees were producing 30,000 muffs a year. In 1936, that number had reached 400,000 muffs. 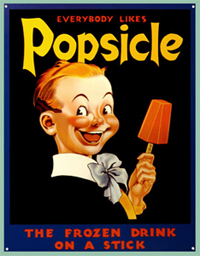 Frank Eperson was just eleven-years old when he discovered a tasty summer treat. He forgot a mixture of soda water and sugar on the back porch one winter night with the stirring stick still in it. The next morning his mixture had turned to ice. He took his frozen water to school to show off to all of his friends.

Eighteen years later, Eperson remember his frozen concoction and started a business producing the frozen desert. The treat quickly became popular. He decided to apply for a patent for his product. On August 19, 1925, he was granted patent number 1,505.592 for a Frozen Confectionary. 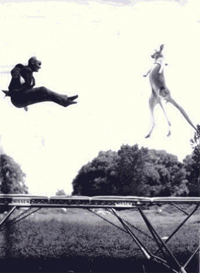 When at the circus, George Nissen saw the trapeze artists flying through the air, dropping at the end of an act into safety netting and bouncing backup into the air doing somersaults and other impressive moves. As a gymnast, Nissen thought this would be a good tool for his training and tumbling. At the age of 16, he built his first bouncing rig in his parent’s garage with a steel frame and a piece of stretched canvas.

A few years later, while studying at the University of Iowa, Nissen made a better version of the rig using nylon instead of canvas with help from his gymnastic coach, Larry Griswold. He took this version to a summer camp where he was a counselor and it was instant hit with the campers.

After college, Nissen and two friends began performing in a traveling acrobatic act called the Three Leonardos. The group performed in Texas and in Mexico using the bouncing rig. It was in Mexico that Nissen heard the Spanish word el trampolin which means diving board. He trademarked Trampoline, an English version of the word for his bouncer. The traveling group popularized the Trampoline and orders slowly started coming in. World War II put an end to the orders but Nissen saw an opportunity and ended up selling Trampolines as training devices for soldiers.

After the war, Trampolines continued to be popular and Nissen spent his life manufacturing and promoting the bouncing toy. Once, he even had a kangaroo bouncing with him in Central Park to gain attention for the Trampoline. 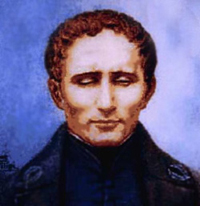 Louis Braille developed a new form of writing for the blind using the same tool that had taken away his eyesight. At 3, he accidentally poked himself in the eye with a stitching awl from his father’s workshop. An infection in this eye eventually led to him going blind in both eyes.

Braille attended the National Institute for the Blind in Paris. At this school, they had a system of teaching children to read by feeling raised letters made by pressing copper wire against paper. The institute had 14 books published with this system of writing and Braille quickly read them all. Braille had learned to read but had no way of writing.

Then, in 1821, former French Army captain Charles Barbier de la Serre visited the school to share his invention of night writing with the students. Called sonography, this series of 12 raised dots and numbers allowed top-secret information to be shared on the battlefield without soldiers having to speak. Braille began studying this form of writing and working on his own improvements. Using his father awl and inspired by a six sided dice, Braille developed a similar system of raised dots. His six dot system was much more efficient. Still, it was not until 1868 that Braille became widely used and accepted worldwide.