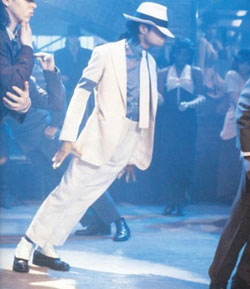 Remember the video for “Smooth Criminal?”

Remember that gravity defying lean from the video?

Ever get to see it live and, noticing a lack of wires, wonder how they did it?

Long before CGI, film producers could employ techniques like the use of wires to create unreal effects on screen – props in production that where carefully obscured or hidden for the polished final piece – but that’s not what Michael Jackson wanted when it was time to take this particular routine on the road …

On October 26, 1993, the King of Pop was issued patent #5,255,452 for “Methods and Means for Creating Anti-Gravity Illusions.” Researched and developed by Jackson and his costume designers, this brilliant piece of intellectual property goes on to describe an almost invisible alternative to the traditional use of wires in a live performance. Employing his signature loafer and sock combination as a disguise, Michael and his dancers performed in Velcro boots which hooked onto the stage at just the right place to hit that famous lean spot-on.

From the actual patent: 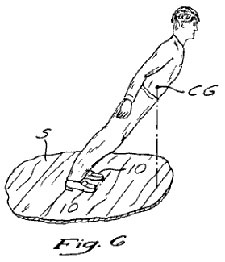 Music entertainers and dancers are constantly searching for new and interesting elements which can be incorporated into their musical and dance performances. Interesting stage design, lighting, fog generators, laser light shows, and large video screens all enhance the appealability of live and recorded performances. Many popular music and dance entertainers expend great efforts in enhancing and choreographing their performances and dancing.

In the past, a professional entertainer, one of the inventors herein, has incorporated dance steps in his recorded video performances, wherein he and other dancers would lean forward beyond their center of gravity, thereby creating an impressive visual effect. This effect was accomplished by the use of cables connecting a harness around the dancer’s waist with hooks on a stage, thereby allowing the dancer to lean forward at the required degree. However, since this requires stagehands to connect and then disconnect the cables, it has not been possible to use this system in live performances. Moreover, the cables obviously restricted arm and body movements.

An inventive genius beyond just the sound booth, don’t you think?

Use patent #5,255,452 to purchase a patent plaque to commemorate the achievements of Michael Jackson – www.patentplaques.com