If the name maser doesn’t ring a bell, maybe laser will.

The first working laser was reported in 1960 and described as “a solution looking for a problem.”

“Today, lasers are everywhere: from research laboratories at the cutting edge of quantum physics to medical clinics, supermarket checkouts and the telephone network.” (The First Laser, Charles H. Townes from A Century of Nature: Twenty-One Discoveries that Changed Science and the World.) 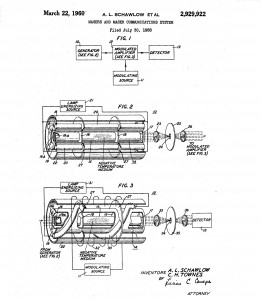 March 22 marked the day in 1960 when Arthur L Schawlow and Charles H. Townes were granted US Patent 292922 for the maser which is now known as the Laser.

But, before thoughts of an Obi-wan Kenobi/Darth Vader duel dance in your head, ponder this: it took more than a few Nobel prize winning physicists to study atoms doing a jig –to pave the path and forge into the future –with the light beams now known as lasers.

Explained, a Laser or, light amplification by stimulated emission of radiation are powerful light beams driven by energy (excited atoms) “that are capable of zooming miles into the sky or cutting through chunks of metal”

According to explainthatstuff.com:
A laser is effectively a machine that makes billions of atoms pump out trillions of photons (light particles) all at once so they line up to form a really concentrated light beam.

A red laser contains a long crystal made of ruby (shown here as a red bar) with a flash tube (yellow zig-zag lines) wrapped around it. The flash tube looks a bit like a fluorescent strip light, only it’s coiled around the ruby crystal and it flashes every so often like a camera’s flash gun.

How do the flash tube and the crystal make laser light? 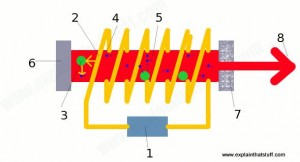 Just how did all this start?

His work with brother-in-law, physicist Arthur L. Schawlow led to the invention of many of the things (most of us) may view as inconceivable to have to live without:

microwaves, music, telephones … and, let’s not forget to mention the bar code scanner which, without those, there’s no telling just how long we might have to wait in a Walmart line.

But first, the history leading up to microwave amplification by stimulation emission of radiation (maser) dates back to 1900 when, Max Planck “deduced the relationship between energy and the frequency of radiation, essentially saying that energy could be emitted or absorbed only in discrete chunks – which he called quanta – even if the chunks were very small.” – photonics.com

It is thought that Planck’s theory “marked a turning point in physics and inspired up-and-coming physicists such as Albert Einstein.” – national-laser.com

Some forty years later, Einstein’s theory was proven correct when scientists were finally able to amplify those emissions “putting lasers on the path to becoming the powerful and ubiquitous tools they are today.”

Meanwhile (and back at Bell labs) “Townes had hired Schawlow for a postdoctoral project involving the application of microwave spectroscopy to organic chemistry. Schawlow didn’t care much for organic chemistry, but he knew something about microwaves from his wartime work on radar. He measured nuclear quadruple moments and, with Townes, studied the effect of nuclear charge distribution on X-ray fine structure.

“I’ve never been a real theorist,” Schawlow once said, “but strangely enough I think several of my best papers have been theoretical.” He explained that he was able to look at the subject with fresh eyes and explain it with a minimum of mathematics.” – osa-opn.org

It was through their collaboration on a book, Microwave Spectroscopy, that Schawlow met Aurelia, Townes’ sister. The two married less than a year later.

According to “Credible (and Edible) Lasers: The Life of Arthur L. Schawlow” by Patricia Daukantas:

“On weekends Schawlow got together with his brother-in-law to finish writing their spectroscopy book, which McGraw-Hill published in 1955. Townes was the first and senior author, but the book boosted Schawlow’s reputation as well.”

“While Townes and Schawlow were eating lunch at Bell Labs one day in October 1957, they found they had both been thinking independently about ways to make masers at shorter wavelengths, going into the infrared, so they agreed to work together.”

Schawlow and Townes first filed for their patent on July 30, 1958, but the rest of the story becomes a little less like a Star Wars trilogy and more of a candy store caper when Columbia grad student, Gordon Gould jotted his idea for building a laser and had it notarized at a candy store in the Bronx on November 13, 1957.

Schawlow and Townes were granted the patent which led to a 30 year patent dispute over the invention of the laser.

And Gould wasn’t the only one: by 1961, Lasers begin appearing on the commercial market through companies such as Trion Instruments Inc., Perkin-Elmer and Spectra-Physics.

Interestingly, the world’s first experiment firing a laser beam into a tropical storm occurred on September 11, 1994 – nytimes.com – twenty years after the debut of Star Wars and the lightsaber duel.

When the first working laser was reported in 1960, it was described as “a solution looking for a problem.” But before long the laser’s distinctive qualities—its ability to generate an intense, very narrow beam of light of a single wavelength—were being harnessed for science, technology and medicine. Today, lasers are everywhere: from research laboratories at the cutting edge of quantum physics to medical clinics, supermarket checkouts and the telephone network. – The First Laser, Charles H. Townes from A Century of Nature: Twenty-One Discoveries that Changed Science and the World. – nobelprize.org