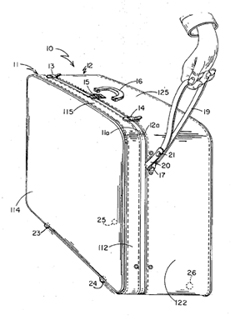 It has only been for the last forty years that traveling did not have to mean a sore back from carrying your luggage. Before 1970, luggage had to be carried. Suitcases did not have wheels. This month, wheeled luggage celebrates its 40th anniversary. Bernard Sadow is the man who made traveling with ten pairs of shoes and enough clothes for a month much easier.

Sadow was at the time the president and owner of U.S. Luggage. While coming home from a vacation in Aruba with his family, he struggled with two packed 27-inch suitcases. During his struggles, he noticed another man pushing his luggage on a skid. Right then, Sadow had the brilliant idea to add wheels to luggage.

Sadow went to work immediately on the first prototype. The first wheeled luggage rolled out of the Massachusetts factory had four caster wheels made from plastic and metal and a rope to pull it. Bernard Sadow applied for a patent on February 16, 1970. He was granted Patent #3,653,474 on April 4, 1972 for rolling luggage.

Designing the luggage may have been easy, but finding stores interested in selling the suitcases was not. Sadow took his invention to many departments stores and buyers and received no interested. Everyone though it was a crazy idea and no one would buy such a thing. Sadow finally found someone who shared his enthusiasm for the product when he landed a meeting with a vice president at Macy’s. The first wheeled suitcases went on sale at Macy’s in October 1970. The luggage which was advertised with the slogan “Luggage that Glides” was an instant success.

Two years after receiving his patent, other luggage manufacturers banded together to fight the patent. The patent was ruled invalid. This opened up the wheeled luggage market to competitors.

Today’s wheeled luggage design has evolved into a two-wheeled suitcase with telescopic handles. Still, without Sadow and his heavy luggage we would all still be struggling and fighting to carry our luggage through the airport.