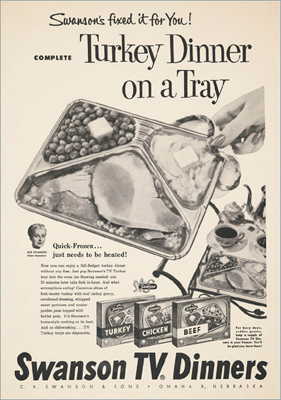 When Swanson introduced the TV dinner in 1954, it was an instant success. The frozen meal fit in perfectly with the nation’s obsession with prepackaged, convenience foods and a growing love of the television. At a price of 98 cents, the first meal sold was basically a Thanksgiving dinner with turkey, cornbread dressing, peas and sweet potatoes. Swanson hoped to sell about five thousand dinners the first year. Instead, sales hit more than 10 million.

Although there were many frozen prepackaged meals before the Swanson’s TV dinner, none were as successful as Swanson’s in its aluminum three-compartment tray ready to be cooked at 425 °F for 25 minutes. Like many food inventions, the actual inventor of the Swanson’s TV Dinner is questionable. Gerry Thomas, an executive at Swanson, claimed he invented the frozen meal. But this claim has been disputed in recent years by other Swanson employees and Swanson family heirs. They claim the product was invented by the Swanson brothers, Clarke and Gilbert.

There are many accounts as to how Thomas formulated the idea for the TV dinner. In one story, the dinner was produced to use a large surplus of frozen turkeys which resulted from poor Thanksgiving sales. Another story is that inspiration for the meal came aboard a Pan Am Airways flight. The three-compartment aluminum tray was fashioned after the a tray in which a in-flight meal was served. Supposedly, the name for the meal did not come from the idea of eating the dinner in front of the television. Thomas designed the packing to resemble the front of a TV set with the inset screen and the rotary knobs.

Even though many including the American Frozen Food Institute and Pinnacle Foods, who now own the Swanson brand, credit Thomas with the invention, the controversy has continued. After Thomas’s death in 2005, obituaries called him the father of the TV dinner. But then so many conflicting reports and articles were published that publications actually retracted the original obituaries.

No matter who had the original idea behind the TV dinner one thing is certain, the product has become a part of American culture. As times have changed, a TV dinner is no longer packaged in an aluminum foil tray for the oven. Today these types of meals, produced by many companies, come in plastic containers for heating in the microwave. Most American’s have eaten at least one, mostly like many more, of these convenience foods.