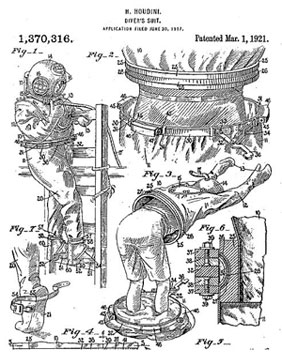 Houdini also held a patent for a style of diving suit. The innovation was granted U.S. Patent Number 1,370,316 on March 1, 1921. The object of Houdini’s diving suit was to allow a diver to get out of the suit while submerged. This helped the diver swiftly and safely escape and reach the surface of the water. It also allowed a diver to don his suit without assistance. This was accomplished by being formed in two halves, with a locking joint in the middle. The diver could reach this joint and release it, and then escape from the suit. END_OF_DOCUMENT_TOKEN_TO_BE_REPLACED