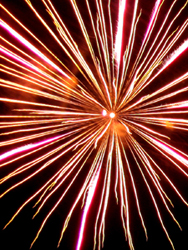 The Chinese invented gunpowder about 2000 years ago. A Chinese monk named Li Tian produced firecrackers later. The first firecrackers were bamboo shoots filled with gunpowder which were exploded at the commencement of the New Year to scare away evil spirits. The Chinese still celebrate the invention of the firecracker every April 18 by offering sacrifices to Li Tian. END_OF_DOCUMENT_TOKEN_TO_BE_REPLACED