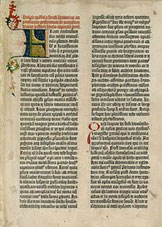 According to traditional dating, on September 30, 1452, Johann Gutenberg’s began printing his Bible which became the first book to be published in volume. The Bible, known as the 42-line Bible because there were 42 lines on each page, was very large consisting of 1280 pages. The Latin words were printed in black ink and then an illustrator added colorful designs in the margin. Two hundred copies of the two-volume Gutenberg Bible were printed, a small number of which were printed on vellum. 48 copies of this bible are known to still exist today.