Thanksgiving is a holiday all about food. Many of the foods we eat at this massive meal have a convenience counter part that was invented by someone or even patented. Some of these foods like cranberry sauce in a can are now part of many people’s holiday traditions.

How many of us sit down for our Thanksgiving dinner and among the other foods there is a log of jelled cranberry sauce? The first canned cranberry sauce was developed in 1912 by lawyer and cranberry farmer Marcus L. Urann. He harvested more berries than he sold during what was then considered cranberry season. In order to profit from these additional berries, Urann developed a way to make sauce that could be canned. He started the Ocean Spray Preserving Company to market his new recipe. In 1941, the log that we think of as cranberry sauce became available. 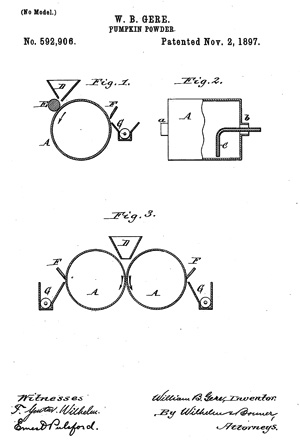 Pumpkin pie is a favorite desert served at many holiday meals. In 1897, William B. Gere received US Patent 592,906 for Pumpkin Powder.

“This invention has the object to place the edible substance of the pumpkin, squash, or sweet-potato upon the market in the form of a powder or meal which combines readily with water or milk and which is ready for use as an ingredient in making pies without requiring to be first cooked.” 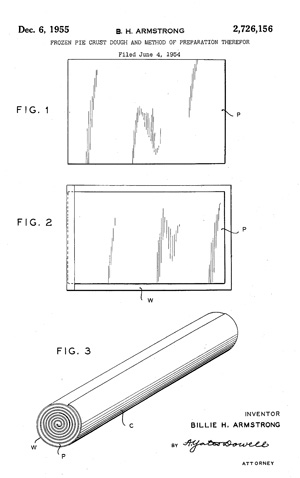 How much easier is it to make a pie since the invention of the frozen pie crust? Billie Hamilton Armstrong received US Patent 2,726,156 on December 6, 1955 for Frozen Pie Crust Dough and Method of Preparation Therefor.

“It has long been recognized in this particular art that the pastry or dough portion of the pie determines to a great extent the quality of the finished article, skill being required in the preparation thereof whereas no such problems are present in connection with the preparation of the filling. It has been proposed to prepare a frozen pie crust, readily available to the housewife, cook, chef, or the like where complete uniformity together with superiority of finished product can be achieved without the necessity for the painstaking preparation of such pie crust, this latter step being one which even those particularly skilled find relatively impossible of achievement.” 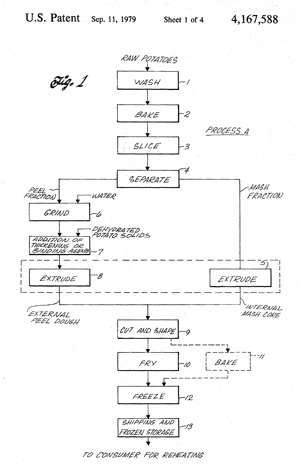