Credit for the toilet should actually go to 16th-century author Sir John Harrington. Harrington was an author and in 1596, he wrote an article named “Plan Plots of a Privy of Perfection.”  In this article, he described his idea of a flush toilet. Queen Elizabeth I was so impressed by his idea that she asked Harrington to install one in the Royal Palace. She even bound and hung his article next to the toilet. This new flush toilet was not properly vented and sewer gas constantly leaked into the Royal bathroom. Bowls of herbs and fragrances were placed around the room to remedy this problem.  This odd invention made Harrington an object of ridicule and he never built another one. After Harrington died, the toilet was taken out of the palace and remained unpopular for the next 200 years. 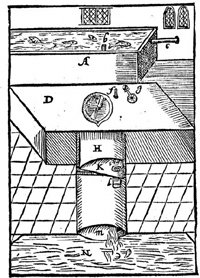 The first patent for a flush toilet was issued to Alexander Cummings, a watchmaker in 1775. This toilet was a predecessor to the modern toilet. Some water was left in the bowl after each flush. A leaking seal at the bottom of the toilet continuously emitted sewer gas into the home though. After Cummings, many inventors worked to improve the toilet and the problems with gases leaking into the house.

Thomas Crapper made many improvements to the water closet. He invented the pull-chain flushing system and an air tight seal between the floor and the toilet. He also helped solve the problem of sewer gas leaking back into the house. He developed and patented systems for venting the gas through a pipe to the roof. Thomas Crapper, though, did not invent the toilet.