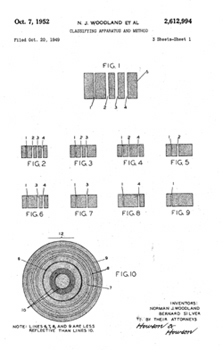 On October 7, 1952 Bernard Silver and Norman Joseph Woodland received US Patent 2,612,994 for “Classifying Apparatus and Method.”

In 1948, Bernard Silver, then a graduate student at Drexel University, overheard a conversation that would eventually lead to the development of the bar code. The president of a local food chain was looking for a system that would automatically read information during the check out process. Silver told another graduate student, Norman Joseph Woodland about the conversation and they began working on solutions.

Their first working system used patterns of ink that glowed under ultraviolet light. The ultraviolet ink had problems with stability and was extremely expensive to print. Still, Woodland was convinced that he had a workable idea. In order to have more time to work on the project, he quit Drexel, sold some stock and moved in with his grandfather in Florida. 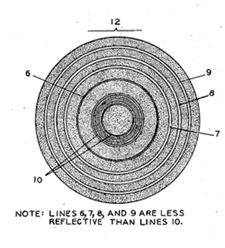 Using ideas from movie soundtracks and Morse code, Woodland came up with the idea of a linear bar code. He formed his first bar code from Morse code on the beach when “I just extended the dots and dashes downwards and made narrow lines and wide lines out of them.” Borrowing from technology used for optical soundtracks in movies, Woodland used a 500-watt light bulb shining through the paper onto an RCA935 photomultiplier tube on the far side to read the codes. Later the system was printed in a circle so that the codes could be read scanned in any direction. This type of code is now know as the “bulls-eye” code. Silver investigated what form the codes should ultimately take and the two filed for a patent on October 20, 1949.

Woodland and Silver never made much money off of the invention. They sold the patent for a small amount of money to RCA. The barcode was an invention ahead of its time.  The patent expired in 1969 and barcodes were not widely used in groceries stores until 5 years later in 1974. In June 1974, one of the first UPC scanner, was installed at Marsh’s supermarket in Troy, Ohio. On June 26, 1974, the first product with a bar code was scanned at a check-out counter.