Who discovered anesthesia? Surely, no one man can take the full credit. But some have tried. The history of anesthesia is a tangled mess full of men who wanted the recognition and riches for its discovery. 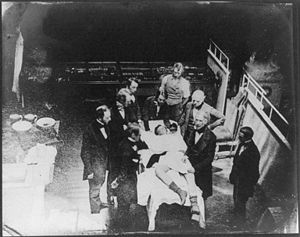 Horace Wells first witnessed the effects of laughing gas in 1844 when it was given to him by a member of a traveling circus. He would then become the first patient to be operated on under anesthesia. He had a tooth pulled by an associate. He later began using the gas on his own dental patients. He never attempted to patent the procedure because he believed the pain relief should be available to all.

In 1845, Wells gave a demonstration of the use of nitrous oxide during a tooth extraction to students at Massachusetts General Hospital. Unfortunately, the patient made a sound which was thought to be from pain. The procedure was deemed a failure and the students left the surgery chanting “Humbug! Humbug!” Wells was humiliated.

A former student and partner of Wells, William Morton, was there to witness the failure. He had also seen a demonstration by one of his professors at Harvard Medical in which a person lost consciousness. In 1844, Professor Charles Jackson demonstrated for several of his chemistry classes that inhalation of sulphuric ether causes loss of consciousness. Morton approached Jackson after Wells’ unsuccessful demonstration for advice on producing a better anesthesia. The actual response by Jackson is still in dispute to this day but it seems that Jackson advised Morton to try ether. 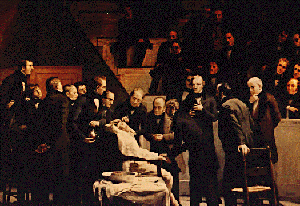 Morton began experimenting with ether on various animals and himself. On September 30, 1846, the dentist successfully extracted the tooth of Boston merchant Eben Frost while his was under the influence of ether. The procedure received a write up in the Boston paper and caught the attention of surgeons.

On October 16, 1846, Dr. Morton was invited to perform a public demonstration of his new anesthesia. The Massachusetts General Hospital head surgeon Dr. John Warren removed a tumor from the neck of 52-year old Edward Gilbert Abbott. Warren determined that the surgery was a success and the patient felt no pain. He commented, “Gentlemen, this is no humbug.” The news of the successful surgery traveled quickly.

Morton understood that there were great amounts of money to be made in anesthesia so he kept the contents of his drug a secret. He added oil of orange to the ether to mask the smell and called it Letheon. Although it was already known that the main ingredient was ether, Morton was still issued a patent for Letheon. The patent was met with great outcry from the medical community. Ultimately, no effort was made to enforce the patent and ether became a commonly use anesthesia. Morton never received the money he though he was due. He even asked congress for a compensation of $100,000 for his discovery. But claims made by Well and Jackson complicated his efforts.

Morton died with none of the riches he had hoped for. His tombstone does say he was the sole discoverer of ether and anesthesia. Wells’ experimented with chloroform as an alternative anesthesia. His eventual addiction to the substance landed him in jail where he killed himself. Jackson never recovered from the bitterness of feeling that he deserved some of the credit for the discovery. He died in an insane asylum.