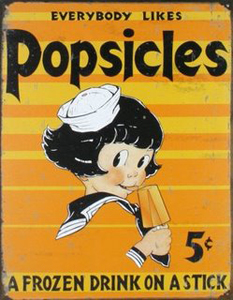 In 1905, an eleven-year old boy mixed some soda water powder and water. The boy, Frank Epperson, forgot the mixture on the back porch with the stirring stick still in the container. Overnight the temperature dropped below freezing turning the mixture to ice. Epperson took the frozen soda water to school to show his friends.

Eighteen years later, in 1923, Epperson remembered his frozen concoction. He started a business producing with what he called Epsicles in seven different fruit flavors. He designed a machine to produce the frozen confection. Epperson’s children referred to the frozen treats as Pop’s ‘sicle. Epperson eventually changed the name from Epsicles to Popsicles. 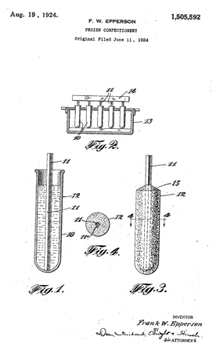 People had been making frozen juice bars since the 1800’s but Popsicles were the first frozen treat of its kind to be mass-produced. Popsicle sticks were first made from Birch wood. By 1928, over 60 million of these treats were sold. During the Great Depression, the twin Popsicle was introduced. Two children could enjoy the frozen goodness on a stick for only five cents.

In the 1950’s, as more people had refrigerator/ freezer combinations in their house, sales of the Popsicle grew tremendously. Boxes of Popsicles were introduced. People were able to keep their own supply of the frozen treat at home.

There are now over 30 flavors of Popsicles. Even as new flavors have been added, orange has consistently stayed the best selling Popsicle. The popularity of the popsicles has not diminished over the years. Today just over a billion of these treats are eaten each year in the United States.