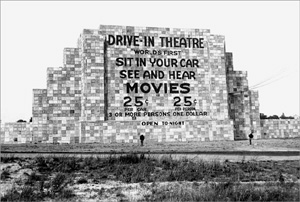 Richard H. Hollingshead, Jr. is credited with the invention of the Drive-in Movie Theatre. Hollingshead’s position as the sales manager for Whiz Auto Products Company was not very interesting and he set out to challenge himself. While studying American culture, Richard discovered that while Americans would never give up going to the movies it was often a hassle for parents. Going to the movies was not a family activity. Children went to matinees while adults dressed up and went to evening shows. A babysitter was needed for the children and dad had to dress up after a day of work.

Hollingshead set out to change how people went to the movies. He wanted to create an open-air theatre where families could watch movies from the car. Hollingshead started experimenting in his own driveway in Camden, New Jersey. Using a screen nailed in the trees, a 1928 Kodak projector mounted on the hood of his car and a radio placed behind the screen, he showed his first outdoor movie. He tested the sound of the movie with the windows up, down and halfway down. A lawn sprinkler was used to demonstrate what would happen in a rainstorm.

Lining up cars in more that one row was initially a problem. The front cars blocked the cars in the rear from seeing the whole picture. Richard experimented with different spacing of the cars and putting blocks under the tires of the cars parked in the rear. These experiments led to finding the correct angles to build ramps and the correct parking arrangement.

Hollingshead along with other three investors began construction of the first drive-in theatre on May 19, 1933. Construction took three weeks and cost $30,000. This first theatre, just named Drive-In Theatre, opened June 6, 1933 in Camden, New Jersey. The admission price at the time was 25 cents per car, and 25 cents per person in the car. No car paid more than a dollar for admission though.

In the next ten years, 5 theatres were opened across the country. The baby boom after WWII led to an increase in the popularity of the theatres. A night at the drive-in was cheap family entertainment, the kids were more than welcome and there was no worry about them bothering other moviegoers. The open-air theatre had its heyday from the late 1950’s to the early 1960’s. At the time, more than 5,000 theatres were operating in the United States. The drive-in became an icon of American culture.

The popularity of the drive-in theatre was short lived. Today there are less than 500 theatres still operational in the United States. The second drive-in ever built in Orefield, Pennsylvania is among those still showing movies. Shankweiler’s Drive-In Theatre is in its 77th consecutive season. 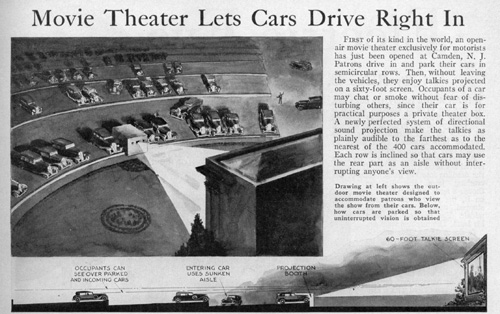