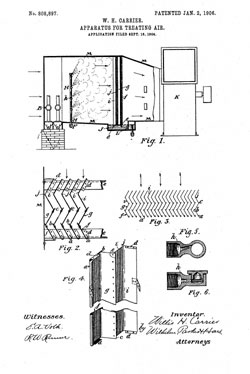 The next time you are enjoying an air conditioned movie theater, shopping mall or  a cool room in your house, you should thank Willis Carrier. As a young engineer at New York’s Buffalo Forge Heating Company, Willis was tasked with solving a humidity-control problem at a Brooklyn printing plant.

The Sticky Back Story

Traditional color printing requires the same material to be run through the press multiple times – each layer a different solid color. It’s a process that requires pinpoint accuracy when aligning the paper being printed: even the slightest shift could cause an entire publication to look horribly wrong. At the Sackett-Wilhelms Lithographing and Publishing Company in Brooklyn, sticky, hot Northeast summers were alone enough to cause reams of paper to become misaligned. Paper in the presses warped and expanded just enough to cause this catastrophic misalignment.

Carrier’s compressor-driven system worked to intake this “bad air,” chill it over lines of coolant, at blast it back out into the public space using high-powered fans. The new air conditioning machine stabilized the heat inside the plant and allowed for constant color printing as had never been seen before.

For this air-controlling system Carrier received Patent #808897, ‘Apparatus for Treating Air’ on January 2, 1906.

But, Carrier’s invention didn’t just solve the problems of one printing company. His ingenuity spawned the start of the Carrier Air Conditioning Company in 1915.

Running his own company to serve the cooling needs of businesses near and far, Carrier continued to develop his air conditioning invention.  He replaced the poisonous ammonia-based coolant and improved the chiller itself to allow for more efficient cooling of even larger spaces.

Carrier passed away in 1950 at the age of 73, but his company thrives on as one of the biggest air conditioning manufacturers on the planet.

As an inventor, Willis Carrier was of course a dreamer, but he was a very practical in his pursuits: