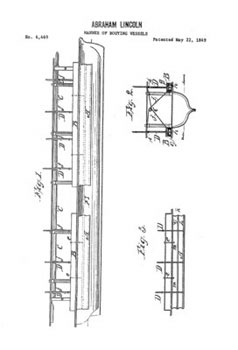 Abraham Lincoln received patent #6469 on May 22, 1849 for a device to lift boats over shoals. His device was never manufactured but he did become the only president to hold a patent.

Lincoln had considerable experience as a boatman. Once while taking a boatload of merchandise down the Mississippi River, his boat slid into a dam. Traveling the Great Lakes on another trip, his boat ran afoul of a sandbar. Lincoln noticed that the efforts to free the boat were similar on both occasions. Lincoln began working on an invention to solve this problem between sessions of Congress in 1848. His solution was a set of bellows attached to the boat just below the water line. When the boat came upon shallow water, the bellows were filled with air that moved the vessel and made it float higher.

Part of the patent application read:

“Be it known that I, Abraham Lincoln, of Springfield, in the county of Sangamon, in the state of Illinois, have invented a new and improved manner of combining adjustable buoyant air chambers with a steam boat or other vessel for the purpose of enabling their draught of water to be readily lessened to enable them to pass over bars, or through shallow water, without discharging their cargoes…” 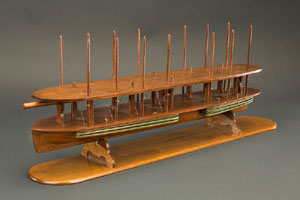 Lincoln made the model for his invention with the help of a Springfield mechanic. This model is on display at the Smithsonian Institution National Museum of American History.

An inventor himself, Lincoln has a great support of patent law. He praised the patent laws for having “secured to the inventor, for a limited time, the exclusive use of his invention; and thereby added the fuel of interest to the fire of genius, in the discovery and production of new and useful things.”

One thought on “Presidential Patents – Lincoln’s Invention for Lifting Boats”