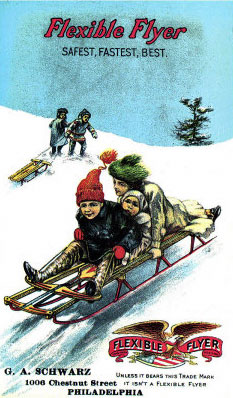 Allen’s first attempts at developing a sled were tested by the children at Westtown School in Pennsylvania. The predecessor of the Flexible Flyer was the Fairy Coaster which was a double-runner or bobsled which held three or four adults. Runners were made of steel and seats of a plush fabric. This entire sled could be folded into a small package for easy transportation on a streetcar or train. The problem with this first sled was a retail price of $50.00. This expensive price tag made it impossible to sell in quantity. A smaller cheaper version of this sled was designed but testing proved it to be too small and not have enough runner for proper steering. Eventually the entire production line for the Fairy Coaster was sold at auction. 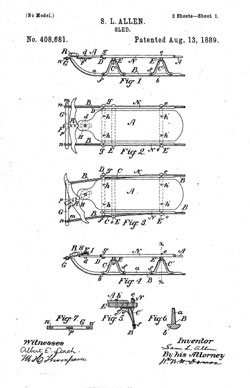 Allen’s need to diversify and love of coasting forced him to continue to try and invent the perfect steerable sled. Eventually, he developed a sled with runners that were weaker in the middle. This acted as a hinge so the front portion could pivot for easy steering. This led to the design of flexible runners attached to the frame that allowed them to be bent sideways with little effort. The front pair of runner struts were attached to a crossbar that floats relative to the seat. A regular sled doesn’t not have this floating crossbar and can only flex at the front struts which limits the steering of the sled.

On February 14, 1889, Allen applied for a patent for this new sled design. He was issued patent #408681 on August 13, 1889. The sled was not an instant success. His new idea was meet with great resistance from his internal sales teams. They were both unsure of how to sell his new product and unhappy about it’s sales cutting into their vacation time. They wanted Allen to sell the patent to an established sled manufacturer but he would not do anything of the sort.

The company did not market the Flexible Flyer again for several years. A revival in interest in outdoors led Allen to again advertise his sled. This time, his product caught the attention of two large department stores: Wanamaker’s in Philadelphia and R. H. Macy Co. in New York City. Sales of the sled grew quickly. By 1915, nearly 2,000 sleds were sold in one day, with an expected total that year of 120,000.