In the mid 1940’s, the young ambitious duo Ruth and Elliot Handler, owned a company that made wooden picture frames. Handler and his partner Harold Mattson built the picture frame samples and it was Ruth’s job to market them. Elliot then decided to use the spare wood to make doll furniture. This began a toy business named Mattel – MATT for Mattson, and EL for Elliot.

Ruth noticed that her daughter, Barbara, and her friends enjoyed playing with dolls that looked like grown ups rather than with baby dolls. Most of these dolls were made of paper and were not three-dimensional. Elliot Handler took the idea of such a doll to his all male ad executive team at Mattel. The committee rejected it because they saw little mass appeal for such a doll.

Soon after, on a trip to Europe, Ruth found the German doll Lilli. She was made of hard plastic with molded on shoes, earrings and blonde hair in a ponytail. The doll was offered in a seven or an eleven-inch size. Lilli inspired Ruth to design the Barbie doll.

Ruth knew exactly how she wanted her doll to look. With help from engineers and technicians at Mattel, she perfected her doll. A fashion designer was even hired to create her wardrobe. 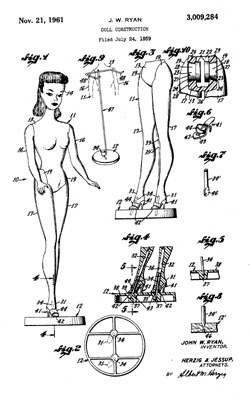 In 1959, Mattel finally agreed to promote Ruth’s doll named Barbie after her daughter Barbara. She debuted at the New York Trade Show in March of 1959 and was not received well by toy buyers. But when she finally arrived on store shelves, the public had a different idea about her. Barbie’s first year on the market she helped set a new record for sales at Mattel. In that first year, 351,000 dolls were sold at $3.00 each. Mattel was overwhelmed by orders for Barbie and it took them several years to catch up.

The first patent for Barbie was applied for on July 24, 1959. Patent # 3,009,284 was granted on Nov. 21, 1961 for doll construction. This patent was for the ability for a doll to stand in a realistic, balanced position when not in use. Many other patents were issued for Barbie including Patent # 3,277,601 granted on Oct. 11, 1966 for a doll having an angularly adjustable limb. This patent was for the ability to move Barbie’s limbs in a lifelike way.

Today Barbie is a cultural icon. She has been joined by many other dolls including her younger sister and a boyfriend, Ken. More than 1 billion Barbie dolls have been sold and the annual sales for Barbie exceeds $1.6 billion. Two dolls are sold each second and the average American girl between the age of 3 and 11 owns 8 Barbies.