Why don’t we just celebrate all year long?

Once upon a time, August was designated as National Inventors Month and then it was changed to May.

Promoting a positive image of inventors and the real contributions they give to this world is a big deal and recognition on a national level with specific time frame set aside for it is certainly awesome.

(Of course, for all other recognition worthy moments throughout the year, there’s patentplaques.com)

Just what is National Inventors Month?

According to information provided at nciia.org, National Inventors Month is the extended celebration of American invention and creativity. 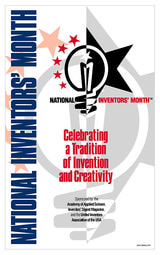 Started in 1998 by the United Inventors Association of the USA, the Academy of Applied Science, and Inventors’ Digest magazine, it was created help “promote a positive image of inventors and highlights their real contributions to the world.”

The recent change-up was explained by Mary Bellis at about.com:

“The move allows more opportunities for youth K-12 to become aware of the vital contributions inventors have made and continue to make to society,” Drummond said, “as well as to more broadly celebrate and foster the spirit and practice of innovation.”

“We want to recognize those talented, brave individuals who dare to be blatantly creative, and therefore different, and whose accomplishments affect every facet of our lives.”

But, whether it’s May or August, ideas can be celebrated any time: whether they come as humorous thoughts about life as someone sees it (fromthemopbucket.com) or, as ways to make life easier and even complex schemes that don’t end well, an idea goes from conception to completion by putting forth the effort to see it through.

For proof, we have Perky.

Henry Drushel Perky came up with the idea for a cereal biscuit we now know as “Shredded Wheat.” 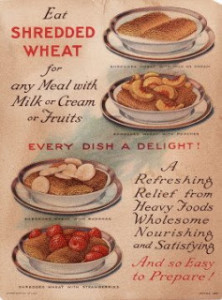 Rumor has it, Perky’s intended to sell the machines but soon discovered the cereal biscuits were more popular than the machines.

He wound up operating “a small bakery in Denver, Colorado to make the cereal biscuits, a restaurant to serve them and a fleet of horse-drawn wagons from which to sell them door to door.”- tasteful-inventions.blogspot.com

These days, cereal lovers can celebrate and stroll down any cereal isle to likely find at least eight varieties of the shredded stuff from mini to frosted minis.

Perky’s invention was touted as what’s for breakfast in a bowl. (just add milk)

Not fond of being so fiber conscious? That’s ok.

For everyone else there’s still bacon, sausage, pancakes and more –no ideas required.

A very good thing for Perky and Ford though, they didn’t have to face palm for being a “day late and a dollar short” (like I did for finding out National Inventors Month had changed months on me.)

Thankfully, the internet is the great provider for lots of other useful information –especially for the curious and creative:

Find out more about the phrase “a day late and a dollar short” and more at wisegeek.org.

Want to patent one? (of those great ideas) go to uspto.gov.

Celebrate inventions every day –but don’t forget to do it May too.