As visions of space travel danced in his head, Dr. Robert H. Goddard’s work with rocket apparatus earned him recognition along with numerous patents throughout his career.

And, if the words “space travel” brings to mind the misadventures of a futuristic family, set aside those thoughts of Jetson utopia to learn about the man who gets a good deal of credit for space travel as we know it.

Goddard made his mark on the world of science – with at least one misadventure – prior to receiving his patent for the first ever successfully launched liquid fueled rocket. 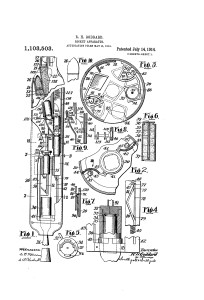 It all began when Goddard first received “public notice” in 1907 after “a cloud of smoke from a powder rocket fired in the basement of the Worcester Polytechnic Institute physics building.“

Good thing for Goddard though, he didn’t get … wait, what? Expelled?

Try fiddling with a small combustion chamber and liquid propellants these days and “things that fly” won’t be an option on a game show, hardly anything remotely close to a rocket and more like handcuffs closing around two wrists.

Then again, if Dr. Goddard, physicist extraordinaire were here and was asked to post bail, chances are he’d wave a translucent finger to tsk, tsk for shame anyone involved with trying to stifle the creative mind of a scientist…

And, Goddard would know.

According to Nasa.gov, Goddard’s contributions to missilery and space flight are a lengthy list and a few too many to total but, by just hitting the highlights we have:

Although Goddard was well accomplished, he didn’t escape criticism and mockery for the work he did which was deemed as “toiling away” with “crazy” and “dangerous toys”.

But, while we still can’t zip around in cool flying cars or shut the front door like George (Jetson) did, every time a rocket gets launched or man goes to the moon, we can give thanks to the man named Dr. Robert H. Goddard whose life began on October 5, 1882 – and ended on August 10, 1945.

“Goddard was the first scientist who not only realized the potentialities of missiles and space flight but also contributed directly in bringing them to practical realization. Goddard had a rare talent in both creative science and practical engineering. The dedicated labors of this modest man went largely unrecognized in the United States until the dawn of what is now called the “space age.” High honors and wide acclaim, belated but richly deserved, now come to the name of Robert H. Goddard.

“On Sept. 16, 1959, the 86th Congress authorized the issuance of a gold medal in the honor of professor Robert H. Goddard.” – Nasa.gov