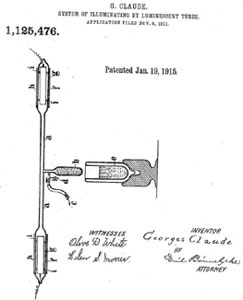 In 1915, a U.S. Patent No. 1,125,476 was issued to George Claude of Paris for a “System of Illuminating by Luminescent Tubes.” This patent was the basis for the neon sign. Claude, an engineer, chemist and inventor was the first person to create a lamp by applying an electrical discharge to a sealed tube of neon. By mixing other gases with the neon, Claude was able to produce the light in many different colors. He, also, discovered that the tubes holding the gas mixture could be bent and twisted. This allowed him to produce the letters and shapes that are the signature of a neon sign.

Claude first displayed this invention that revolutionized sign making at the1910 Paris Expo. In 1923, under the company Claude’s Neon, he introduced neon signs to the United States. The first two signs were sold to a Packard dealership in Los Angeles. Two signs reading “Packard” were sold to Earle C. Anthony for $1,250 a piece. People would stop and stare at this new signs visible in both and day and night for hours. Neon signs were given the nickname “liquid fire”. 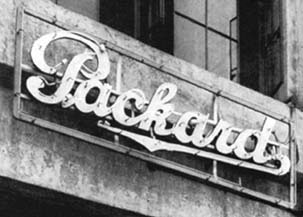 Claude had obtained international patent rights for his invention. He alone made the neon signs and transported them to the United States and many other countries. However, as the demand for neon signs grew, this became impractical. He began selling franchise licenses for $100,000 and royalties.

“Claude Neon” signs became so popular that many people actually thought that Neon was the last name of this inventor. But with this popularity, came intense commercial and patent wars. In the 1920’s, many of the Claude Neon patents were deemed invalid but the original 1915 patent was still considered valid. All knowledge of how to produce neon signs was kept strictly confidential.

Neon reached the height of its popularity in the 1950’s. Everyone was making use of this sign, which was always visible, from Las Vegas casinos to motels along Route 66. The overuse of neon led to ordinances in many cities and along highways and there was a sharp decline in the demand. Today though, these iconic pieces of American culture still dot our landscape.