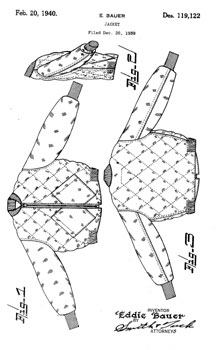 On February 20, 1940, Eddie Bauer received Design Patent Number 119,122 for a jacket. Bauer caught hypothermia while fishing in the cold, rainy Washington winter in 1936. After his near death experience, he began attempting to develop alternative outdoor wear.

The wool garments worn by him and other outdoorsmen at the time were very heavy and did little to protect against the rain. Bauer remembered the jacket his uncle, a Russian soldier, had worn. A light but warm goose down filled jacket had help to keep him warm in the below zero temperatures of the Russian winters. Eddie Bauer designed and sewed a quilted goose down jacket for himself. Bauer wore this jacket out into the elements and discovered that it was indeed very warm. His friends began asking him to sew jackets for them too. 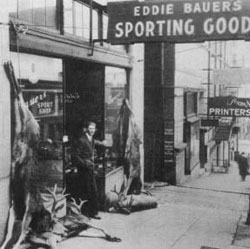 Bauer soon began mass production of the America’s first quilted, goose down insulated jacket. These jackets called the “Skyliner” sold for $34.50 at Eddie Bauer’s Sporting Goods store in Seattle. It was an instant success with anyone who spent any time outside including Alaska bush pilots and climbers. Bauer began in 1936 with ten seamstresses. By 1940, 125 seamstresses were needed to keep up with the increasing demand for his quilted jacket.

Bauer expanded his line of quilted apparel and even offered sleeping bags. Between 1934 and 1940, Eddie Bauer was issued more than 20 patents for a variety of outdoor clothing and sporting equipment. During World War II, Bauer’s parkas, backpacks, pants, and sleeping bags were standard issue for American troops. His labels were included in these jackets so after the war troops knew exactly were to purchase their own jackets. A mailing list of 14,000 soldiers supplied by the US government allowed Bauer to begin his successful mail order business in 1945. By 1953, the catalogs sales were $50,000. Sales grew rapidly and by 1956 totaled $500,000. Today, Eddie Bauer stores continue to sell outdoor wear inspired by the original “Skyliner.”