The Wienermobile. What’s the deal with the vehicle? Does it have a patent?

What a great question, Archie!

Indeed, the “deal” with the Wienermobile is quite an interesting one, and, yes, it does have a patent associated with it.

It all started in 1936 when Karl Mayer, nephew to beloved meat magnate Oscar Mayer, imagined what would become the best known promotional vehicle (literally!) in American history.

Mayer chose the General Body Company of Chicago to realize this vision. The 13 foot long frank first rolled off the assembly line July 18, 1936 at a cost of $5,000 — no small price in the middle of the Great Depression! 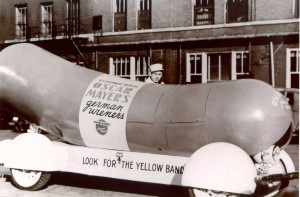 While it spent the first few years of its life bound to the streets of Chicago, Wienermobile-mania continued to spread as the company began visiting towns across the country. Gas rationing in WWII may have kept the friendly frank off the streets for a time, but by 1969, the famed Wienermobile made its first trans-continental journey.

To protect his creation, Carl G. Mayer received a design patent D171,550 for an automotive vehicle on September 27, 1952. Any one of the fleet of 8 wandering wurst can now be seen across the United States, and even in foreign countries like Canada, Spain, or Japan.

In addition to the design patent, the Wienermobile is protected by a number of trademarks.

Ask the Geek, Get a Free Patent Mug

That’s right, if your question is chosen to be featured in our weekly “Invention Geek” column, we’ll send you a free one-of-a-kind patent mug custom pressed with a picture from your invention and the title of Honorary Invention Geek.

Got a pressing question about innovation history? Jump over to Ask the Invention Geek for details & an easy entry form!