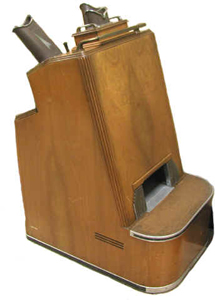 Shoe-fitting fluoroscopes were common items found in US, Canadian and British shoes stores from the 1920’s until about 1960. A shoe fitting fluoroscope allowed for a real time x-ray of a person’s foot inside a pair of shoes. A customer would stick his/her feet in the opening of the fluoroscope while standing and look through a viewfinder. The bones of the feet and the outline of the shoes were visible with the x-ray. Real time viewing allowed the customer to wiggle his/her toes and see how much room was inside the new shoes.

In the 1920’s, many inventors were looking for a way to utilize the new technology of the fluoroscope. A fluoroscope was made up of an X-ray-generating tube and a fluorescent screen. A person would stand between the two and the part of the body being x-rayed would appear on the screen.

Dr. Jacob Lowe created his first fluoroscopic device for x-raying feet during World War I. The process of helping many injured military personnel was greatly sped up by eliminating the need for his patients to remove their boots for an x-ray of their feet. When the war was over, Lowe modified his device for shoe fitting. He showed the device at a Boston shoe salesman’s convention in 1920. Dr. Lowe applied for a patent for this device in February of 1919. In 1927, U.S. patent number 1,614,988 was granted for a “shoe fitting machine.” Lowe assigned this patent to the Adrian Co. of Milwaukee. 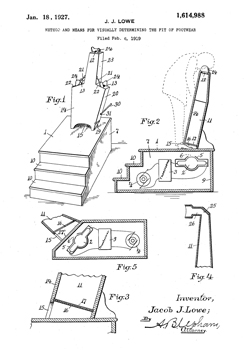 This device encased the fluoroscope in a wooden or metal case. Customers would try on a pair of shoes, walk over to the device and stick their feet in the case.  The green glow of radiation activated with the press of a button produced a picture of the bones of the customer’s feet. The only thing between the customer’s feet and the X-ray tub was a .039-inch-thick piece of aluminum. The fitter had three viewfinders, one for the customer, one for the salesman and one for a parent.

The shoe-fitting device became available at the beginning of the Great Depression. This was the perfect time for the machine to hit the market. Saving money was very important at the time. Sales pitches for the shoe-fitting fluoroscopes implied that the device would allow a parent to buy the perfect fitting shoes for their child and these shoes would last longer.  In reality though, the same shoe fitting could be accomplished with simple measurements. The shoe-fitting device did attract potential customers to the store and children certainly had more fun while shoe shopping.

Customers gravitated towards the stores which used the shoe-fitting device for sizing. More and more of the devices were sold. It was estimated that in the early 1950’s, fifteen thousand units were being used in the US, Canada and Britain. Despite warning by various medical organizations about the safety of these devices, shoe stores continued to use fluoroscope. It was only when shoe store employees began showing signs of sometimes severe radiation, people began to question the safety of these devices. Massachusetts and the District of Columbia passed regulations about the operation of the fluoroscope. In 1957, Pennsylvania became the first state to totally ban the use of the shoe-fitting fluoroscope. By 1960, continued regulations and warnings led to the complete demise of the shoe-fitting fluoroscopes. Shoe stores it seemed were happy to be rid of the contraption as most viewed them not as a helpful tool but more as a gimmick to bring in customers. 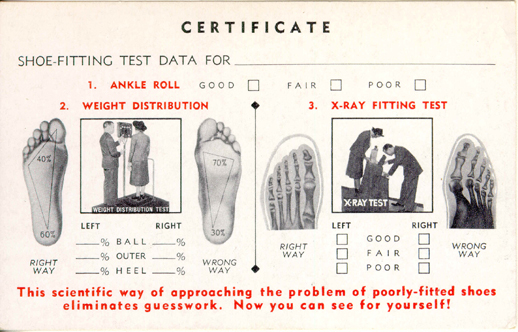