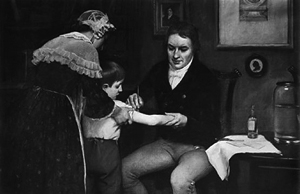 Edward Jenner’s discovery is considered to have saved more lives than the work of any other man. Edward Jenner’s great gift to the world was his vaccination for smallpox. Before Jenner’s work with the disease, smallpox was an extremely deadly illness. The disease killed one in three of those who caught it. Those who were lucky enough to survive the disease were greatly disfigured.

There was an old wives tale that milkmaids could not catch smallpox. Jenner was fascinated by this story and began doing research to find out why. He believed there was a connection between the non-life threatening cowpox caught by milkmaids and their supposed inability to catch small pox.

The cowpox produced pus-filled blisters on the hands of the milkmaids. Jenner concluded that the pus in these blisters was involved in protecting against smallpox. To try out this theory, Jenner obtained material from the hands of Sarah Nemes who caught cowpox from a cow named Blossom and injected this pus into the arms of an eight year old boy. 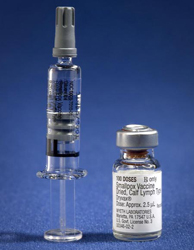 James Phipps, the son of a poor landless laborer, was Jenner’s first guinea pig. On May 14, 1796, Jenner injected Phipps in both arms with the pus from Sarah Nemes. Over several days, he gradually increased the amount he injected into Phillips.  He then purposely injected Phipps with smallpox. Phipps became ill but he quickly recovered and suffered no side effects.  James Phipps shared a bed with two of his sibling while sick with small pox and neither of them contracted the illness from him. Jenner’s experiment was a success. He had discovered the first vaccination.

When Jenner published his findings, he was humiliated by his fellow British citizens. Although Jenner trained in London, he spent his career as a country doctor in his native county of Gloucestershire in Western England. Prejudices of English society at the time caused people to refuse to admit that a country doctor could make a discovery that would change the world.  Eventually though, the success of his treatment had to be accepted. In 1840, the British government banned the use of any other immunization for smallpox except for Jenner’s treatment.

Jenner never patented his discovery. Patenting the vaccination would have made it too expensive and unobtainable for most people. Jenner’s immunization was his gift to human kind. Thanks to Jenner, smallpox was considered eradicated by the World Health Organization in 1977.