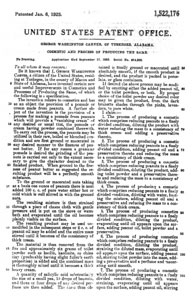 Carver has been credited with discovering over three hundred different uses for peanuts and hundreds of different uses for soybeans, pecans and sweet potatoes. His discoveries include bleach, fuel briquettes, instant coffee, synthetic rubber and wood stain. Despite all of these inventions, Carver only applied for and was granted three patents. His other two patents were #1,541,478, granted on July 9, 1925 and #1,632,365 granted on July 14, 1927 for paints and stains produced from clay. END_OF_DOCUMENT_TOKEN_TO_BE_REPLACED