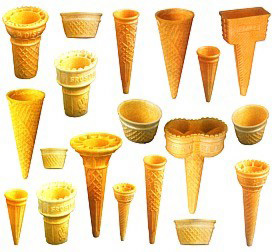 The most commonly accepted story is that Ernest Hamwi produced the first cone. Arnold Fornachou, an ice cream vendor at the fair ran out of paper bowls in which to server his ice cream. Hamwi was selling zalabi, a waffle-like pastry at a neighboring cart. He came to the aid of Fornachou by rolling his waffles into a cone to hold the ice cream. After the fair, Hamwi partnered with J. P. Heckle to open the Cornucopia Waffle Company.

Abe Doumar, also claimed to have invented the ice cream cone at the world’s fair. Doumar sold paperweights filled with water supposedly from the River Jordan at the fair. He spent his evenings with the waffle vendors. The story goes that Doumar suggested to a vendor that he could turn his penny waffle into a ten cent treat by making a cone and adding ice cream. He then bought a waffle, rolled into in a cone and filled it with ice cream. Doumar claimed to have invented what he called “a Syrian ice cream sandwich.” 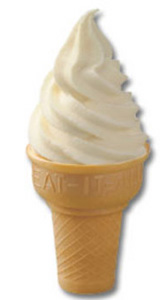 After the fair, Doumar moved to North Bergen, New Jersey and developed a four-iron machine to make zalabi that could be rolled into cones. He opened successful ice cream stands at Coney Island and in North Bergen. Doumar moved to Norfolk, Virginia and opened a shop there ahead of the Jamestown world Fair in 1907.

David Avayou, a Turkish native also claimed he was the first to sell the edible cones at the world’s fair. He said the rolled paper cones he saw ice cream vendors using in France inspired his idea. After the fair, Avayou set up an ice cream stand in a Philadelphia department store.

An ice cream vendor at the fair, Charles Menches, claims to have invented the cone for a lady friend. The story goes that he rolled two warm zalabis around a cone-shaped splicing tool for tent ropes. When the waffles cooled, they held their shape. He gave these cones to his lady friend. She used one for holding flowers and one for ice cream.

Menches and his brother started the Premium Ice Cream Cone and Candy Company in Akron, Ohio after the fair. They are also credited with the invention of the candy–coated peanut and popcorn snack known today as Cracker Jacks.

No one will even know who really invented the ice cream cone, but the 1904 St. Louis Fair certainly elevated its popularity. Demand quickly out grew the ability to produce the hand-rolled waffle. Makers and companies began developing ovens and machines to mass-produce the cones. The largest ice cream cone company in the world today is the Joy Cone Company. The company bakes over 1.5 billion cones per year.