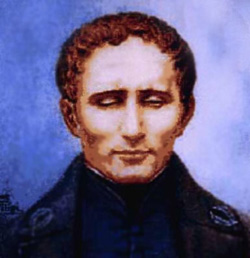 At the age of 3, Louis Braille accidentally poked himself in the eye with a stitching awl from his father’s workshop. The original injury was not very serious, but Louis went blind when the eye later became infected. That trauma then lead to the young boy going blind in his other eye, too.

At 10, Braille was admitted to the National Institute for the Blind in Paris, the first school of its kind in the world. Students were taught basic craftsman skills and simple trade. They also had a system of teaching children to read by feeling raised letters made by pressing copper wire against paper. Publishers of these books often included numerous stories in one book to save money, causing the books to weigh as much as 100 pounds. Braille quickly read and mastered the 14 books available at the National Institute. While the method certainly helped become a proficient reader, the school had no system for teaching him to write as well. 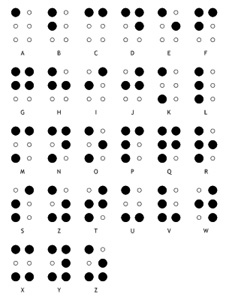 Then, in 1821, former French Army captain Charles Barbier de la Serre visited the school to share his invention of night writing with the students. Called sonography, this series of 12 raised dots and numbers allowed top-secret information to be shared on the battlefield without soldiers have to speak. Louis Braille began studying the method closely, discovering both the potential of the idea and the shortcomings of the the limited 12-point system.

Using his father awl and inspired by a six sided dice, Braille developed a similar system of raised dots. The six dot system was much more efficient than the 12 dots originally used in Sonography. By using a different numbers of dots in different arrangements in each cell, Louis formed 63 dot combinations to represent letters, numerals, and musical and scientific symbols. It was a practical code, too, since the dots took up roughly the same space as print. Letters could be recognized used one fingertip with no movement. Recognition of letters and reading became much quicker.

Despite the obvious ease of the Braille system, the public was very skeptical. Blind students had to teach themselves this new system for reading and writing. It was not until 1868 that Braille became widely used and accepted worldwide.