Well, for starters, all three were invented by accident.
It’s pretty amazing that these, like many other inventions, are the byproducts of a mistake or have uses that were not the original intention. Nonetheless they are now some of the most well known, popular and sometimes very important inventions. 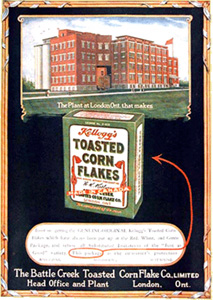 William Keith Kellogg and his brother, Dr. Harvey Kellogg, were strict Seventh Day Adventists. Dr. Kellogg was the superintendent of The Battle Creek Sanitarium in Michigan and was constantly searching for healthy foods.

One of the brothers’ healthy foods was discovered completely by accident. On April 14, 1896, a bowl of cooked wheat was left sitting out, went stale and turned into little tiny flakes. They toasted the flakes and served them to the patients of the Sanitarium. The flakes were a big hit. The brothers also experimented with other grains including corn and eventually came up with Corn Flakes.

A patent for “Flaked Cereals and Process of Preparing Same” was filed on May 31, 1895, and issued on April 14, 1896, under the name Granose. William Kellogg created the Kellogg’s Company to mass market his new product. In order to make the flakes more appealing to a larger audience, he added sugar. This addition made Harvey Kellogg very unhappy and he refused to join the company. 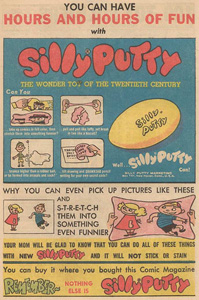 During World War II, the Japanese were invading rubber-producing countries in the Far East. The lack of rubber was impacting the war efforts. It was becoming increasingly difficult to manufacture rubber tires and boots for soldiers. The US government challenged industries to produce a synthetic rubber.

In 1943, James Wright, a Scottish engineer working for GE was one of the individuals who began experimenting with ways to make a synthetic rubber. Wright combined silicone oil and boric acid in a test tube. The resulting substance was a stretchy bouncing polymer. This substance did not have the properties of rubber and was put on the shelf.

In 1945, GE sent samples of the polymer to engineers all around the world looking for a practical use. In 1946, Ruth Fallgatter a toy store owner was given a ball of the goo and she saw the potential for a brand new toy. Fallgatter and marketing consultant Peter Hodgson began selling the stretchy fun product in plastic eggs for $2.00. Thus, Silly Putty was born. 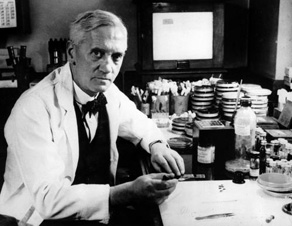 In 1928, Penicillin was discovered completely by accident. Alexander Fleming left a plate culture of Staphylococcus bacteria uncovered for a few days. He returned to find the plate covered with bacteria growth minus spots were a blue-green mold had contaminated the sample. Alexander then grew the mold in pure form and discovered that it killed a number of disease causing bacteria. In 1929, Fleming published his results and noted that there was a possibility that this mold could have a medical purpose if it could be produced in large quantities.

These are just a few of the many great inventions that were a complete accident. Others include Teflon, Post-It Notes, Saccharin and the Slinky.

One thought on “Mold Into Medicine? Discovery of Penicillian and Other Accidental Inventions”