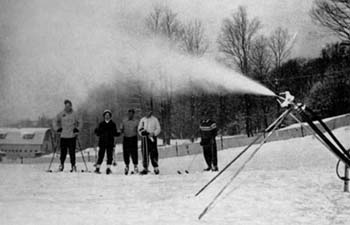 The opening of the ski slopes is not completely in the hands of Mother Nature, and for that you can thank Dr. Ray Ringer. Ringer was not actually trying to invent a way to extend the ski season. His discovery of snowmaking is another happy accident.

Ray Ringer was working with other Canadian scientists to study the effects of rime ice on jet engines. An attempt to reproduce natural weather conditions lead to the discovery of how to make snow. The scientists were spraying water into the air of a low temperature wind tunnel right before a jet engine intake to create rime ice on the aircraft. Instead of creating ice, they kept making snow. The jet engines and the wind tunnel had to be shut down regularly to shovel away the powder. END_OF_DOCUMENT_TOKEN_TO_BE_REPLACED 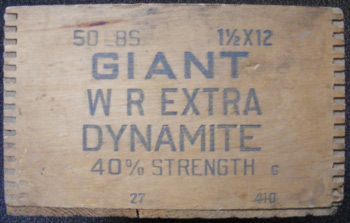 Swedish chemist, inventor and engineer Alfred Nobel held more than 350 patents and owned several companies which created and sold explosives. Still he is best known as the founder of the Nobel Prizes and that is the way he wanted.

Alfred Nobel began experimenting with nitroglycerine as an explosive in 1863. These experiments were very dangerous and accidents in the lab led to the deaths of several people including Noble’s younger brother. Because of this the Swedish government banned the experiments inside the city limits of Stockholm. This ban did not deter Nobel. He moved his experiments to a barge on Lake Malaren. In 1864, he began mass production of nitroglycerin. END_OF_DOCUMENT_TOKEN_TO_BE_REPLACED 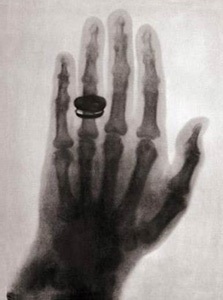 This week in 1895, a monumental advancement in medical technology was made by accident in a German lab.

On November 8, 1895, German physicist Wilhelm Röntgen discovered X-rays while experimenting with vacuum tubes. Röntgen was investigating cathode rays with a fluorescent screen painted with barium platinocyanide and a Crookes tube which he had wrapped in black cardboard so the visible light from the tube wouldn’t interfere. He noticed a faint green glow from the screen, about 1 meter away. He realized some invisible rays coming from the tube were passing through the cardboard to make the screen glow. END_OF_DOCUMENT_TOKEN_TO_BE_REPLACED

Question from Emily W.:
I know potato chips were invented by mistake – or I guess you could say prank – by a chef fed up with a guest complaining about his fries not being crispy enough.
But is it really true that the cook who invented them wasn’t allowed to get a patent because he was part African-American? How long ago was it, really?

The story goes that George Crum invented the potato chip at a resort in Saratoga Springs, New York during the summer of 1853. A guest in the restaurant where Crum was a chef sent back his order of French Fries complaining they were too thick and mushy. Crum decided to play a joke on the patron. He cut a batch of potatoes as thin as possible and then fried them until they were hard and crunchy. Instead of being angry about this new dish, the guest loved the potato chips. Soon others were coming to the restaurant asking for the thinly cut, deep fried potatoes. Crum opened his own restaurant in 1860. The main attraction of this restaurant was the basket of potato chips placed on the tables.

Do you have a question for The Invention Geek? Submit it here.

“Anyone can become an inventor as long as they keep an open and inquiring mind and never overlook the possible significance of an accident or apparent failure.”
– Patsy Sherman 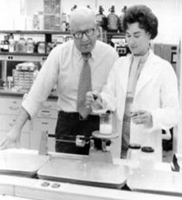 In 1953, two 3M scientists attempted to develop a new type of rubber for use in jet aircraft fuel lines.

Instead, they stumbled upon a substance that put heinous plastic seat covers to shame.

That’s right: Scotchgard is yet another revolutionary product that was invented completely by mistake.

It happened one fine day as Patsy Sherman and Sam Smith toiled away on their experimental compound. As the story goes, a lab assistant dropped a bottle of the substance all over her lab shoes and quickly became annoyed that she couldn’t clean it off with soap, alcohol or any solvent. END_OF_DOCUMENT_TOKEN_TO_BE_REPLACED

Webster’s dictionary defines serendipity as the faculty or phenomenon of finding valuable or agreeable things not sought for. Accidental discoveries have happened in all fields and disciplines. Some great advancements in medicine have been the product of serendipity. Nitrous oxide as an anesthetic, rubber gloves to control infections and insulin are among these discoveries:

Nitrous Oxide as an Anesthetic
In 1798, Humphry Davy took a position at the Pneumatic Institution which was investigating the use of gases in the prevention and cure of diseases. At the Institution, Davy discovered that nitrous oxide could be inhaled by people. Davy did various tests of the gas on himself and his friends. A chamber was even built for the inhalation of the gas. Through these tests he discovered that inhalation brought about an altered state of intoxication. He also realized that the even if the inhaler was semi-conscious the sensation of pain was considerably dulled by the gas. His initial recommendation to use the gas for surgery was ignored. It was forty-fives years later that nitrous oxide was finally used as an anesthetic by dentists. END_OF_DOCUMENT_TOKEN_TO_BE_REPLACED

Well, for starters, all three were invented by accident.
It’s pretty amazing that these, like many other inventions, are the byproducts of a mistake or have uses that were not the original intention. Nonetheless they are now some of the most well known, popular and sometimes very important inventions. END_OF_DOCUMENT_TOKEN_TO_BE_REPLACED 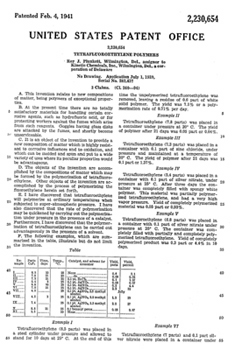 On the morning of April 6, 1938, Plunkett and his technician assistant, Jack Rebok, were setting up for an experiment with the refrigerant gas tetrafluoroethylene (TFE). Plunkett hoped to make a refrigerant by reacting hydrochloric acid with TFE. Plunkett had made a hundred pounds of the gas, to be sure to have enough for all his chemical tests, and for toxicological tests as well. He stored the gas in metal cans with a valve release. Plunkett kept the cans on dry ice, to cool and liquefy the TFE gas. One of the pressurized cylinders of TFE that they had filled failed to discharge when its valve was opened.  They weighed the tank to see if the gas had leaked out but it was still full. They tried to unclog the valve but still nothing came out. Rebok suggested sawing the tank in half to see what had gone wrong. Despite the danger of explosion, Plunkett agreed. Inside the cylinder they found a white power. The gas had solidified through polymerization. END_OF_DOCUMENT_TOKEN_TO_BE_REPLACED 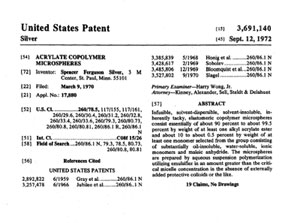 Sometimes an inventor will make a best selling product completely be accident. The Post It Note is an example of that. In 1968, Dr. Spencer Silver invented a repositionable adhesive that was strong enough to stick to surfaces but did not leave any residue. Silver had not set out to produce such a glue. He was actually trying to make a very strong adhesive. Patent Number #3691140 for Acrylate Copolymer Microspheres, the adhesive used on Post It Notes was granted to Spencer Ferguson Silver on March 9, 1970. But 3M never utilized this adhesive. END_OF_DOCUMENT_TOKEN_TO_BE_REPLACED