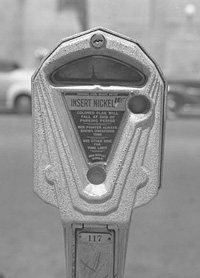 Carl Magee was a member of the Oklahoma City Chamber of Commerce Traffic Committee and was assigned the task of solving the parking problems in Oklahoma City. People that worked in the down area were parking on the streets all day which left very few spaces for shoppers and other visitors to the business district.

Magee built a crude model and then enlisted the help of the Oklahoma State University Engineering Department. A contest to built a working model ran from February 7 to May 6, 1933. Several students entered but there were no acceptable working submissions. Professor H. G. Thuesen began working on the project with the help of George Hale, a former student. Magee, Thuesen and Hale created a working parking meter. Magee received patent # 2,118,318 for a coined controlled parking meter on May 4, 1938. 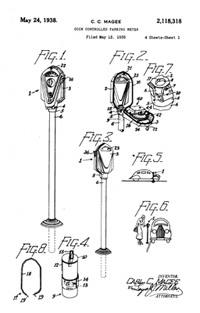 So the next time you feed a parking meter, remember the nickname “the coin gobbler”.