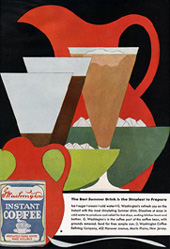 Everyone has at one point or another, drank a cup of instant coffee whether we wanted to or not. In 1901 – by many accounts on July 24 – Japanese American chemist Satori Kato invented instant coffee while living in Chicago. Kato had already invented soluble tea. He was later approached by a U.S. coffee importer and roaster about applying his method for dehydrating tea to coffee. With the help of an American chemist, Kato was successful. The same year, the Kato Coffee Company distributed free samples of its product at the Pam-American Exposition in Buffalo. The company had very little success with its new product. Very few liked the taste of the coffee and it was considered a novelty. Kato received U.S. Patent No. 735,777 on August. 11, 1903 for a Coffee Concentrate and Process of Making Same. 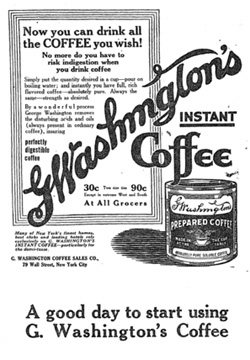 Five years later, George Constant Washington, an English Chemist living in Guatemala, invented the first mass-produced coffee. He noticed a powdery substance on the spout of his silver coffee pot. He experimented with this dried coffee further and created his own version of instant coffee. Washington also invented a way to mass-produce his instant coffee for which he received a patent.

He began selling his product named Red E. Coffee in 1909. During World War I, his entire product was bought by the U.S. Army. The soldiers began referring to the instant coffee as a cup of George. His company became the G. Washington’s Coffee Refining Company. This instant coffee was sold until 1961.

Today instant coffee is sold by numerous brands all over the world. Forty percent of coffee purchased globally is instant.